The Heckler & Koch VP9 is a polymer-framed semi-automatic striker-fired handgun. The VP designation in the name refers to Volkspistole, which translates to “people’s pistol”, while SFP stands for “striker-fired pistol”. The 9 stands for the caliber designation of 9 mm.If you’re thinking about picking up a new pistol and want something that’ll run out of the box with some legitimately rad ergonomic features built-in, grab the HK VP9. While you might want to invest in some gloves, the VP9 feels great in the hand, shoots well, and is a gun you shouldn’t sleep on. If you don’t yet own a striker-fired pistol and want to, the HK VP9 is a solid choice as a dependable sidearm with HK’s time-tested reliability. It will without a doubt be worth the cost of purchase, measured over its long lifespan.

The VP9 is Heckler & Koch’s latest, and most successful pistol design. We are pleased to announce that H&K VP 9 pistols will be shipped with the following upgrades:

Of course, the updated models retain all the existing features of the VP that have quickly made the VP series a class leader in ergonomics and trigger performance.

In any firearm, especially a handgun, the many “touchpoints” between the shooter and the firearm are critical to consistent, repeatable, performance. The touchpoints we’ve emphasized on the VP that may actually help you improve on the range as well.

Experience gained by HK engineers with the P30 hammer-fired pistol had a direct influence on the design of the VP9, but the VP9 breaks new ground with its integration of a unique striker firing system with an enhanced HK “light pull” trigger. The net result is a pistol with custom-fit ergonomics with trigger quality unequaled in any production striker fired handgun.

Ergonomic, adjustable grip– Every detail, including the grip angle, the contour of the front strap and the high rear saddle were chosen to fit the human hand. And the adaptable grip frame allows you to interchange both backstraps and grip panels in 27 unique configurations to fit your hand. All of these features help you get the same consistent grip, every time you pick up your VP.

Best-in-class trigger– The VP trigger surpasses those found on competitors. It has a short, light take-up with a solid, single action type break followed by a short positive reset. 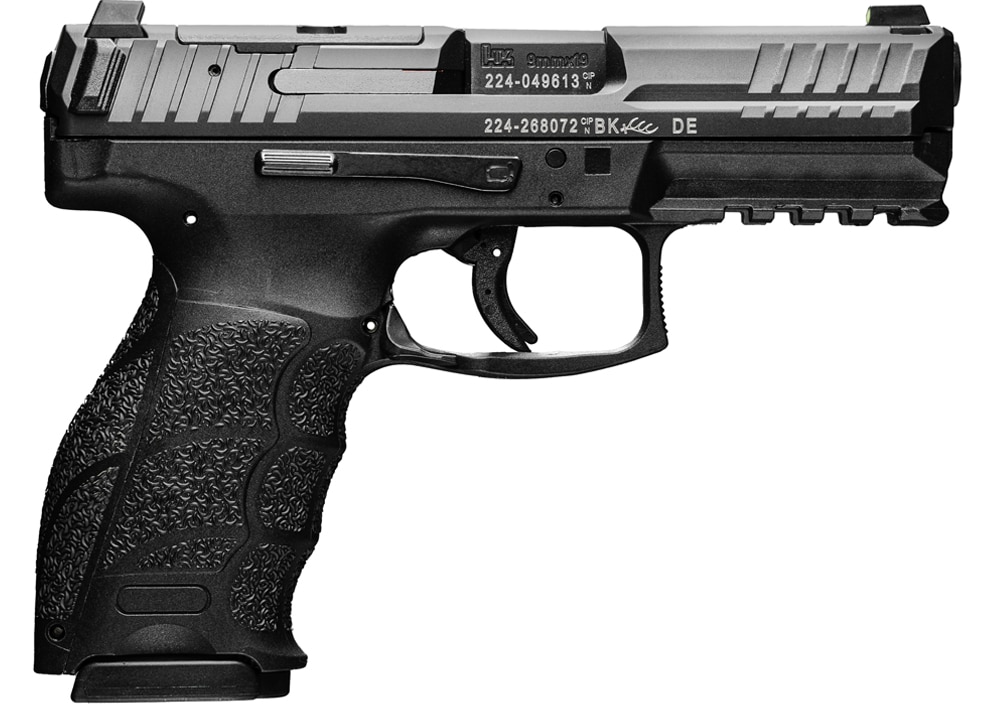 In addition to these features, all controls are completely ambidextrous including HK’s patented charging supports — simple components that are mounted on each side of the rear of the slide and provide better gripping leverage for racking the slide rearward. The charging supports speed reloading and make operating the VP9 easier for shooters with reduced hand strength. The VP pistols uses the proven P30 steel magazine; 17, 15 and 10-round capacity available.

The VP9 has an extended Picatinny MIL-STD-1913 rail molded into its polymer frame for mounting lights and accessories. The rail has been tested and certified to handle mounted accessories up to 5.6 ounces.

The VP9’s machined steel slide is protected from corrosion and wear by HK’s hostile environment finish.

Be the first to review “Heckler & Koch VP9” Cancel reply