Buy Desert Eagle 429 DE 6in Black Pistol – 7 Round – The Desert Eagle Pistol has emerged as a pop-culture icon. You can customize your Desert Eagle Pistol with a variety of impressive finishes to add your own distinctive twist to this timeless firearm. All models feature a full picatinny style accessory rail on the barrel from the end of the chamber to right behind the front sight.

The 429 DE pistol has a black steel slide a black steel frame with Picatinny bottom rail and a 6 steel barrel with integral muzzle brake and black appointments. The pistol ships with a 429DE 7round magazine.

WE ARE THE GOLD STANDARD

Dubbed the .429 Desert Eagle (DE), Magnum Research has a new, super fast .44- caliber cartridge in its lineup. It’s based on the .50 Action Express (AE) cartridge case that’s been necked down for .429- diameter bullets. The goal? To find the maximum useful velocity in a big-bore semiautomatic handgun.

Aside from a couple of obsolete cartridges that failed due to design flaws, the .429 DE is easily the most potent factory made .44-handgun cartridge in existence. 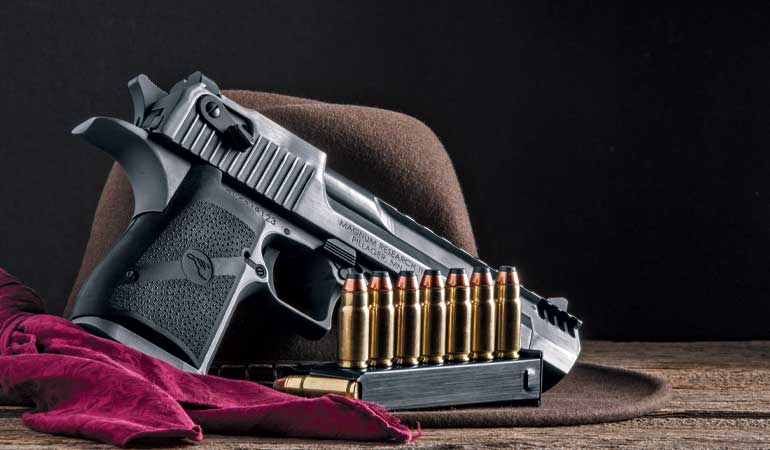 Magnum Research has developed a new, fast, powerful .44 caliber pistol cartridge. The 429 DE (Desert Eagle) was designed to enhance the famous and powerful Desert Eagle platform. This cartridge has a 25% velocity increase and 45% energy increase over a 44 Mag (240 — 6″ barrel). It has a velocity of 1600 FPS with 240 grain bullets and 1750 FPS with 210 grain bullets.

The 429 DE features 30 degree shoulder that it headspaces on and a neck long enough to properly hold and crimp a 240 grain bullet without set back under recoil. Based on the famous 50 AE cartridge, the 429 DE is made with Starline brass, and loaded by HSM in Montana with Speer and Sierra bullets. 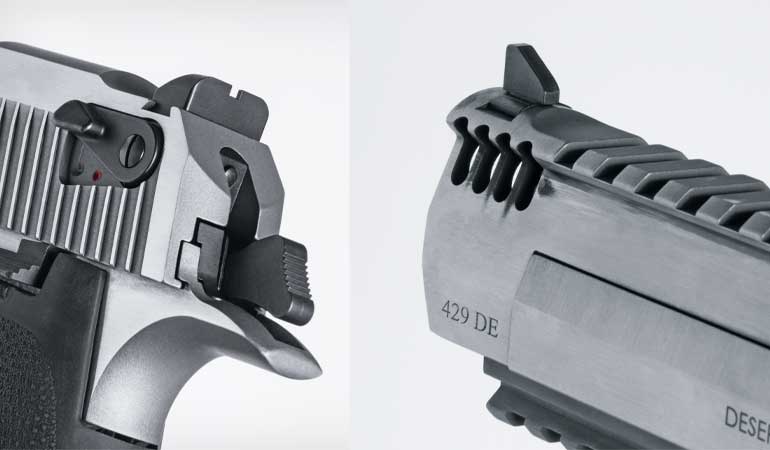 The 429 DE Mark XIX spare barrels with Picatinny style accessory rails are available in a variety of finishes. The barrels are 6″ and are compatible with any MK19 USA or Israel Desert Eagle Pistol with a wide .830” rail on top of the barrel and uses a 50AE magazine and bolt.

Available in the following finishes:

After 25 years of being accessorized, customized and re-imagined in countless movies, television shows and video games, the Desert Eagle® Pistol has emerged as a pop-culture icon. You can customize your Desert Eagle Pistol with a variety of impressive finishes to add your own distinctive twist to this timeless firearm. All models feature a full picatinny style accessory rail on the barrel from the end of the chamber to right behind the front sight and standard ambidextrous safeties. 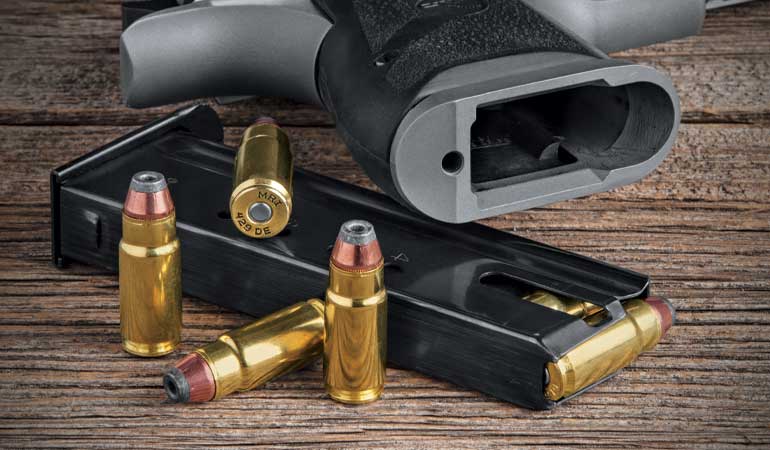 The .429 DE is not plagued by a lack of puissance. It’s a bona fide, hand-fired cannon. It carries lighter projectiles than it’s big .50-caliber brother, but it heaves them faster.

You don’t have to search much longer to find great Desert Eagle pistols for sale here at GunBroker.com. As the largest online gun auction in the world, we offer several variants of the Desert Eagle, including the Mark I, Mark VII and Mark XIX. A gas-operated, semi-auto pistol, the Desert Eagle is primarily used by hunters, target shooters and for silhouette shooting.

Not to be confused with the Micro Desert Eagle, which is intended for personal protection, the Desert Eagle is a customizable handgun able to handle a variety of cartridges and magazines. If you’re intrigued about the Desert Eagle and want to learn more, visit the GunBroker.com Product Center to uncover all the information you need.

To say the Desert Eagle looks good on camera is an understatement. The pistol has been featured in hundreds of Hollywood films like RoboCop and Cliffhanger, and also on television shows like Miami Vice and Fringe. Designed by Bernard C. White of Minnesota-based Magnum Research in 1983, Magnum’s current models also include the Magnum Lite and Mountain Eagle, and a revolver known as the Magnum Research Big Frame Revolver (BFR).

The Desert Eagle uses a gas-operated mechanism that’s normally found in rifles and not the blow-back or short recoil designs that describe most semi-auto pistols. The earliest variation of the Desert Eagle put into production was the Mark I, which was chambered in both .357 and .44 Magnum versions.

Check out Desert Eagles for Sale

So are you ready to bid on, buy Desert Eagle pistols? We make the auction process a cinch and have for more than a decade. If you’re still intrigued about Desert Eagles for sale but want to do your research, you can get plenty of details about Desert Eagle models  Product Center. Morning, noon and night, the Product Center is chock full of information about manufacturers and guns from A to Z, as well as product reviews, images, hunting gear, ammunition and then some.

Weighing at an almost 5 pounds, the stout Desert Eagle has always been in demand for two-fisted handling. Now, Magnum Research is proud to introduce two lighter weight models which make a noticeable difference when handling the pistol although two hands are still recommended for most shooters. The Desert Eagle L5 and L6 are lighter by a pound or two respectively in comparison to other similar Desert Eagle products.

With both of the initial factory-ammo offerings in hand along with a Desert Eagle equipped with a .429 DE-marked barrel, I sallied forth to test this monster.

Figuring my middle-age eyes wouldn’t give the pistol it’s best shot at producing tiny groups, I mounted an Aimpoint Micro H-2, which is possible since the Desert Eagle Mark XIX features an optic rail atop the fixed barrel. Resting the massive semiauto on a sandbag rest, I glued the red dot to the target spot and began shooting groups.

With wind gusting to 19 mph, my groups produced adequate results, but just barely. I thought to myself, Surely this pistol should shoot tighter groups given calmer conditions! With point of aim and point of impact adjusted to be the same, I shot an 8-inch Birchwood Casey steel popper-type target at 50 yards in an attempt to see how lethal I’d be on deer at that distance. I disappointed myself by hitting it just four times out of 10 shots.

Grumbling, I studied the pistol, yanked off the red dot and resettled onto the sandbags to fire another group at a 25-yard target using the iron sights. The resulting group measured half of those groups I’d fired using the optic.

Perplexed but relieved, I ran another series of accuracy tests to give the pistol and cartridge its rightful representation. I fired the last four cartridges I had on hand at the 50-yard popper. Three impacted perfectly with one scratching the edge of the plate.

I’ve used Aimpoint red dots to tighten groups while accuracy testing handguns with measurable benefit. Whether it was tricky light conditions, the mounting of the optic on the Desert Eagle’s rail or some aspect of the cartridge’s recoil dynamics, I just don’t know.

I’d consider felt recoil from the .429 DE to be zesty, but it’s not painful due to the pistol’s semiautomatic design and the inherent recoil absorption that goes along with its 4½-pound weight. Buy Desert Eagle 429 DE

By my measurement, velocity figures didn’t quite hold up to the factory-advertised numbers, but they weren’t far off. The lightweight 210-grain hollowpoints were zippy as they exited the muzzle at an average of 1,668 fps, which was 82 fps slower than advertised. Similarly, the heavier flat-nose 240-grain bullets averaged 1,541 fps — 59 fps slower than factory spec. Even at those speeds, the .429 DE produces impressive energy figures. Buy Desert Eagle 429 DE

Sierra’s 210-grain hollowpoint generates over 1,300 foot-pounds (ft.-lbs.) of energy at the muzzle. Zeroed at 50 yards, it drops just 3 inches at 100 yards where it still packs 785 ft.-lbs. of wallop. As for the 240-grainer, it generates 1,285 ft.-lbs. at the muzzle and drops 4 inches at 100 yards where it impacts with just over 800 ft.-lbs. The 240-grain bullet’s greater sectional density makes it a considerably better choice for hunting.

On that note, given one .429 DE-related wish, I’d love to see a factory load pushing a 300-grain controlled-expansion bullet, or better yet, a 300-grain, hard-cast, gas-checked bullet with a broad, flat nose. Either would be big medicine on elk, moose, bison and the like should you be so inclined to pack a Desert Eagle in pursuit of big western hooved game.

As for reliability, it wasn’t perfect. Three times the slide locked open on a partially full magazine while test-firing the 210-grain factory load; once it locked back halfway through a magazine full of 240-grain bullets. Either the slide is reciprocating so fast that the next cartridge occasionally isn’t getting up against the feed lips in time, or more likely, the recoil spring isn’t quite worn in yet and the timing of the slide is a tad off. The failures to feed occurred early on and, with one exception, went away during the last half of my testing. Buy Desert Eagle 429 DE

Some might knock this pistol for the malfunctions I’m reporting, but I’m not one of them. Consider this: It’s an enormously powerful tool of gargantuan proportions that features precise engineering, machining and tight tolerances. In my opinion, a firearm such as this deserves a break-in period. Conventional wisdom, even with the Model 1911, is to never trust a pistol entirely until you’ve got at least 500 rounds fired through it.

The .429 DE’s ergonomics are interesting. The big pistol isn’t easy to pack, and it’s not particularly comfortable to hold in the hand. You’d have to have fairly big hands to fire it one-handed. However, the sights are excellent. As for the trigger, the one on our sample required a tad over 7 pounds to fire.

Hauling the slide back to chamber a fresh round, or to clear a cartridge from the chamber, requires a decent amount of hand strength. Regardless, slide travel is quite smooth and it’s fun to watch and feel the rotating bolt work.

If you already own (and shoot) a Desert Eagle Mark XIX in .50 AE, then yes; I’d say you owe yourself a sparkling new .44-caliber barrel. If you simply want to own a sidearm chambered for the latest, fastest and most powerful .44-caliber cartridge currently made, then absolutely — you must purchase a .429 DE pistol. If you want to hunt the bigger big-game species with a handgun and like shooting semiautos, then there probably isn’t a better setup than the Magnum Research Desert Eagle.

Given time, the .429 DE could prove to be the most versatile hunting cartridge in a Desert Eagle of them all.

Where the .429 DE is going to outshine the .50 AE is when handloaded. It’s not because projectiles can be pushed to faster velocities than factory ammo (a bad idea in this case), rather, the reason to handload the .429 DE is that the cost per shot goes down significantly. Because the .429 DE fires the same projectiles as the common .44 Magnum, component bullets are readily available and for reasonable prices. By the time you read this, reloading die sets should be available from the major reloading suppliers.

Unfortunately, there is no manufacturer-published handloading data available yet. Presumably, the classic big-bore magnum pistol powders such as Hodgdon’s H110 and H4227 will be appropriate for handloading the .429 DE. 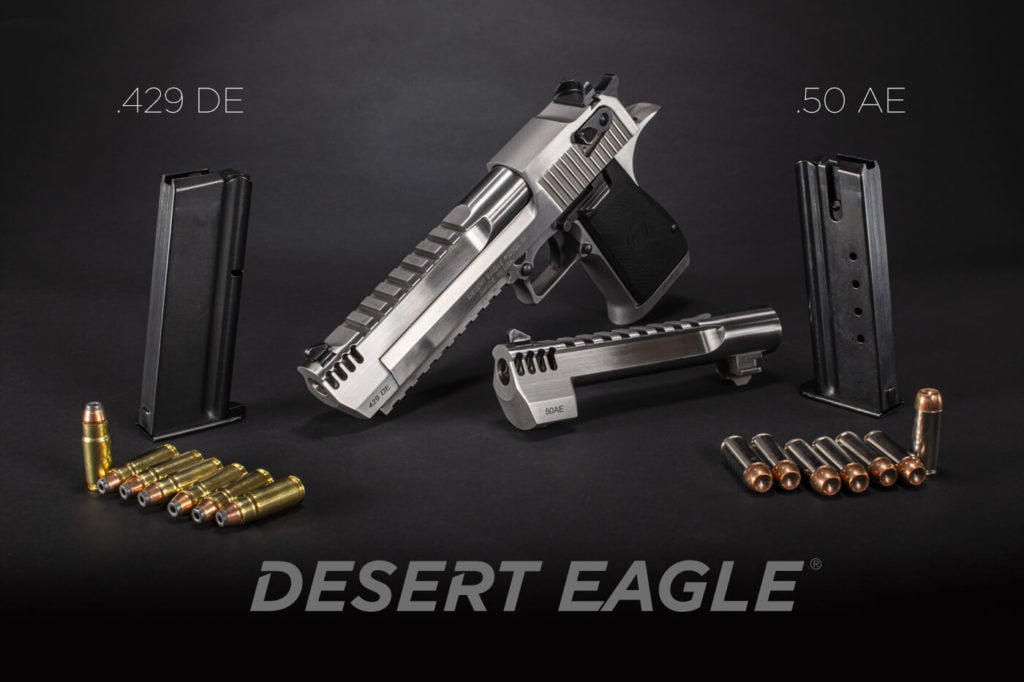